If you’re looking for information on “do cats make friends,” it might be because you’re considering introducing another animal into your home. After all, some cat breeds, like the Siamese, are happiest in the company of others. And while you may already have a dedicated Cat Sitter to provide your cat with cuddles while you’re away, wouldn’t they be happier with a kitty companion? And, really, wouldn’t your home be much better with three or four more cats?

Well, let’s hold off on opening the floodgates on cat adoption and talk a little bit more about how cats make friends. Because while the answer is yes, your home would be an absolute dream with four cats in it, there are a few things you should know about feline friendships.

So, before calling your landlord to ask them how many cats they’ll allow, you might want to read up a bit. 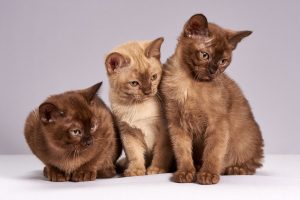 Let’s take it back to the fundamentals. Do cats make friends in the wild?

Maybe the animal kingdom has the answer to our question, “Do cats make friends?” Surely, everything we know about our furry friend has roots in wild cats.

Well, yes and no.

In some species of cats, social living is common. Lions, for instance, are probably the most recognisable example of a kitty community. They live together, hunt together, raise those cute little future lion kings together. They’re a tight-knit crew.

But, there are also plenty of examples of solitary cats, too. Mountain Lions, or Pumas, live alone for all but a 3-to-10-day mating period. Even a female Mountain Lion will only hang out with her cubs for about 1 to 2 years. Then, she’s back to her solo life.

And how about the closest ancestors to today’s domestic cats: Felis Silvestris? This a group of 3 types of wild cats. They may look like your average house cat but would definitely bring out the claws if you tried to put them in a cute little cat costume.

Like the Mountain Lion, Felis Silvestris cats tend to be solitary. They may breed a few times a year, but the rest of the time? They’re cruising their territory, hunting alone, and keeping themselves warm at night.

So, sadly, we’re no closer to answering the question “do cats make friends.” Let’s keep digging.

In terms of domestication, feral cats aren’t so different from our cuddly house cats. In fact, as the Department of Sustainability, Environment, Water, Population and Communities points out, they’re the same species. The only difference – and it is a big one – is that these felines didn’t have contact with humans early enough in life. As a result, they’re self-sufficient and not at all interested in crawling into your lap.

What we see in these feral cat colonies is that, while the adults will hunt and eat alone, their downtime might be spent with other feral cats. In some instances, they may even nap together, groom each other, and take care of kittens communally.

And it gets even more interesting. Feral cats apparently have subgroups. Like a school cafeteria, small groups of cats within a colony will spend more time together, presumably whispering about the cats in other subgroups. Usually, these kitty clicks will consist of family ties, but not always. It seems that, just like humans, cats have friend preferences.

Sounds like the proof we need to answer our question of “do cats make friends” right?

In reality, the conditions have to be just right for feral cat colonies to exist. In particular, there has to be a surplus of food. Without competition, it’s a lot easier to tolerate another cat in your territory. But when food starts running out, the colonies tend to scatter. If the competition is really fierce, all bets are off, and cats will go back to a completely solitary lifestyle.

What this tells us about feline friendships is that we can’t think of them the same way as our own human connections. Humans are extremely social animals, in all aspects, and we’ll pretty much stick together through thick and thin – even to our own endangerment.

Cats, though, will pick and choose their social networks based on survival and access to resources. It’s a tough world out there for a cat. We’ve got to admire their tenacity.

Alright, yes or no – do cats make friends?

We still haven’t talked about those keepers of our hearts – the domestic cat. Do these furry friends of ours make friends with other cats?

The answer is yes. Well, probably.

Domestic cats, in general, tend to be more social than wild and feral cats. They seek out contact more frequently and they’re more trusting. Plus, in a home environment, there’s never an issue of resource scarcity, so they shouldn’t be tempted to fight it out for food. Indeed, for most cats, mindful and gradual introductions are successful and you can have a harmonious home.

But not every cat is welcoming to another feline in their space, and having a new cat in the house can be dangerous. It’s important to always monitor new interactions between cats to make sure that violence doesn’t erupt. Remember, cats don’t make friends the same way we do, and in some situations, it might be necessary to remove a cat for its own safety.

So, do cats make friends? The final verdict is…yes, and also maybe no

Do cats make friends? Insert shrugging emoji. Cats are complicated. They have the potential to get along swimmingly with new cats. They might even like the new cat more than they like you! But, similar to humans, it can be hard to predict chemistry. Some cats just don’t spark.

If you’re interested in bringing cats into your home, remember to take things slow and listen to your furry friend. They’ll tell you if they’re happy with having you as their only friend.

Meet Cassie, Our November Pet Sitter of the Month

How Do Cats Apologise?