Is it a Poodle? Is it a Golden Retriever? No…it’s a Goldendoodle! In this Dog Breed Corner, we learn all there is to know about the youngest Oodle designer breed. Do you own a Goldendoodle who requires some A-grade pet care? Whether you need a Pet Minder in Newcastle, Geelong, or any other part of Australia, we’ve got what you need! 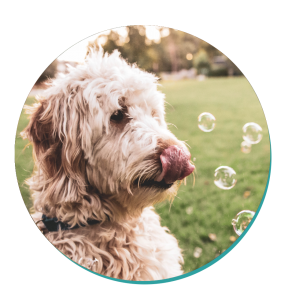 Goldendoodles came onto the scene as recently as the late 1990s, presumably in response to the popularity of the Labradoodle. Breeders assumed that, just like the Labradoodle, they could create a dog with an allergy-friendly coat plus all of the lovable traits of the Golden Retriever.

Let’s start with a brief rundown of the Golden Retriever. This is a dog with a clouded history, but one thing’s for sure: they’re a mixture of style and substance. The Golden Retriever served as an invaluable companion for gamekeepers and hunters, and early breeders worked hard to achieve a golden coat. The primary job for Golden Retrievers was to seek out and bring back fallen birds.

Poodles were also bred to be the perfect hunting companion, specifically for duck hunters in France and Germany. Much like their Golden Retriever counterparts to the north, Poodles had the important job of retrieving fallen birds in ponds and lakes.

Unlike the Golden Retriever, the Poodle line was separated into three separate size categories – the standard for retrieving, the mini for sniffing out wild truffles, and the toy purely for companionship.

As you can see, these two breeds have shared a lot in common over the years. But while their jobs may have been similar, what does each breed bring in terms of personality? Let’s take a look.

Because both of its ancestors were bred for hunting, the Goldendoodle is a focused, people-pleasing, intelligent doggo. Both Golden Retrievers and Poodles needed endurance, grace, and determination to be able to navigate difficult terrain. And their hunting tasks required patience and self-control.

Like many social breeds, the Goldendoodle doesn’t enjoy long periods of alone time. They want to be around other humans or animals. If you do work outside of the home, it’s a good idea to call on a trusted Dog Walker for some much-needed company and exercise.

Before we move onto trainability, there is one final thing to mention about Goldendoodles. Because while the majority of these doggos are go-with-the-flow and happy-go-lucky, you might also get a Goldendoodle with an inner diva. Poodles can sometimes be a dominant force in the household – always lovable, but also stubborn – and you may see this in your Goldendoodle. It’s nothing to be too worried about. With obedience training, your Goldendoodle won’t become an aggressive Alpha dog. Instead, you’ll just have a Goldendoodle with a little more personality than you bargained for.

When it comes to training, Goldendoodles are ready to step up to any challenge. It’s no surprise that like the Golden Retriever, the Goldendoodle is one of the most popular breeds for assistance dogs. You can see them aiding people with visual impairments or disabilities or working as hearing dogs for the hearing impaired.

Even if you’re not training your Goldendoodle to be a service dog, you’ll find that they’re easy to train. With a Goldendoodle, you have a dog that is obedient, eager-to-learn, and super smart. That’s a winning combination for Dog Owners with any level of training experience.

The best groundwork that you can do with your Goldendoodle is to build a strong relationship. These dogs are incredibly smart and loving, and when they see you as the centre of their world, training will become that much easier.

Reward-based or positive reinforcement training is the most effective approach for Goldendoodle. Their people-pleasing nature makes the Goldendoodle particularly sensitive to less supportive forms of training, so remember to keep things positive. It’s much better to take breaks with your Goldendoodle if things aren’t going well than to verbally reprimand them.

In general, Goldendoodles will respond well to rewards such as treats. But, if you’re worried about weight management, you can also use toys and play for your reward system instead.

All Goldendoodles, regardless of their size, need daily exercise. Their lineage includes working dogs on both sides, which means that you’ve got a dog that was built to run, jump, swim, and dig.

Under that luxurious coat is a body that was bred for agility, so keep that in mind when you’re creating an exercise schedule for your Goldendoodle. One trap that some Goldendoodle Owners fall into is believing that because this doggo is so laid-back and affectionate, they’re happy lounging around the house all the time. But really, this dog needs at least an hour of exercise per day.

It can be a nice long game of fetch (they can chase after a tennis ball for hours on end), a jog, some fun time at the dog park, or a brisk walk in the neighbourhood. But no matter what type of exercise you choose, don’t skip it! That smart Goldendoodle brain will get bored without their daily exercise, and you don’t want to see what kind of mischief they’ll get into when you’re not looking.

This will really depend on the size of Goldendoodle you have. After all, experts bred the toy Goldendoodle as an indoor companion animal, so they’ll be pretty happy in any size apartment or home. Of course, they still need to receive regular socialisation and go outside for daily exercise, but a huge backyard? Not a priority.

Mini and standard Goldendoodles are medium to large sized dogs, and they’ll be happier with more space to move around. Because they’re so people-oriented, having a large outdoor space isn’t as important to a Goldendoodle as quality time with family. But they wouldn’t mind the chance to romp around in a backyard with their favourite humans and doggie friends, if you have one.

Something important to know about Goldendoodles is that they can be vocal. So, while they want to be friends with just about everyone they meet, they might not make the best pet in an apartment building.

One of the main reasons why Poodles are such a popular breed in hybrids is because of that appealing coat. But whether your Goldendoodle is more Poodle or Golden Retriever will have a huge impact on the coat, and there can be quite a bit of variety within the breed.

If you’re closer to the Golden Retriever coat, you’ll have a dog with long, wavy fur that may not be suitable for people with allergies. These types of coats will also shed a lot more and may retain more of a doggie smell.

On the other hand, a Goldendoodle with more Poodle will have a coat that is curlier and less likely to shed.

As you’re looking for the right Goldendoodle for your home, you should talk to your responsible breeder about what kind of coat is most appealing to you. No matter what, you’ll get an adorable dog with a cuddly coat and a winning personality.

One nice thing about the Goldendoodle is that they’re not as uncomfortable in the heat as purebred Golden Retriever. Because unlike the Goldens who evolved for the wet cold of the North, Poodles have a single coat that has adapted to more temperate climates. Of course, you should still ensure you never expose your Goldendoodle to extreme heat or cold, but at least you don’t have to worry quite as much about clipping during the summer months.

Now, how about at-home and professional grooming?

When it comes to at-home care, you’ll want to brush and comb your Goldendoodle daily. This will ensure that the fur isn’t matting or tangling next the skin, and that you’re loosening up any dead skin. It’s very important to keep on top of this daily routine, because the matting may not be visible beneath the top layer.

On which note, you should also take your Goldendoodle to a professional groomer periodically. About every 4 to 6 weeks is standard.

As with other hybrid dogs, Goldendoodles are pretty healthy. The crossing of breeds can eliminate or at least reduce the risk for many genetic issues and Goldendoodles tend to live happy healthy lives.

The key, of course, is to get your Goldendoodle only from a reputable source. With a highly popular dog like this one, it’s sadly very common to see irresponsible breeding programs. So make sure to do your research if you want a puppy that will be as healthy as possible.

Even with the best breeding practices, there are a few things to watch out for in this breed:

As all large dogs that evolved to run, you’ll want to be on the lookout for bloat, as well.

Fun Fact about the Goldendoodle ♥

Parti colouration in dogs happens when the coat is 50% white and 50% one other solid colour. In Goldendoodles, you can have a Chocolate Parti, Black Parti, Cream or Apricot Parti, Red Parti, Sable Phantom Parti. I mean, the list alone makes us want to buy streamers and cakes to throw these Goldendoodles a Parti party.

And as if all of this Parti talk wasn’t fun enough, there’s another Goldendoodle colouration that you’ll see in the breed: the Tuxedo Goldendoodle, aka the Abstract. Will Abstract Goldendoodles are not one full colour, they don’t meet the requirements to make the Parti guest list (we’ll stop with the puns, now.) Often, they’ll sport a colour across their body and face, with a splash of white on their chest and paws. It’s as if they’re wearing a Tuxedo but forgot to don their fancy shoes.

Final Thoughts on the Goldendoodle

Oodle breeds are some of the friendliest, goofiest dog breeds that you can find – and the Goldendoodle is no different. This dog will make you laugh, steal your heart, and convince you to work from home as much as possible.

They have medium exercise needs, don’t like to be alone for long, and are highly intelligent. While this makes training fun, it also ensures your dog doesn’t view themselves as the ruler of your household. If you spend a lot of time away from them, you’ll want to find a consistent and reliable Pet Sitter.

They get along great with strangers, children, and other animals, and they’re cute as a button.