You can’t help but do a double-take for this doggy wonder. The Komondor may look like a mop-on-legs, but there’s so much more to this hilarious looking pup! Do you have a Komondor who requires some peerless care? Book a Mad Paws Dog Sitter in Brisbane, Hobart, Broome, or anywhere else! 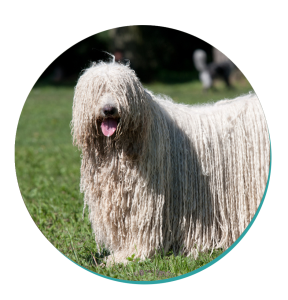 The Komondor dog has seen the rise and fall of civilisations. And, more than once, their own future has been in question. While the Komondor may not be the most well-known dog, they’ve surely had a huge impact on history!

It’s unclear just how old this dog breed is. We can trace them back to at least the 13th century, when they were living alongside the Cuman people, a group of nomadic tribes originating in Turkey. The origins for the name Cuman—kum, kuam, and kun—give us a good indication that the Komondor history and that of the Cumans is one and the same. For hundreds of years, these dogs helped the nomadic societies raise their cattle and sheep by protecting them from predators.

Eventually, as the result of regional wars and invasions, the Cuman society was dispersed and absorbed into the nation of Hungary. But even with the end of their nomadic lifestyle, the Komondor dog didn’t go by the wayside. Instead, they continued to work as herd guarding dogs throughout Hungary.

As is often the case with European dog breeds, the Komondor had a tough time in the wake of World War II. In the years following the end of the war, less than fifty Komondors remained to carry on the breed. And it was only thanks to the tireless work of dog fanciers that the numbers slowly recovered over the next few decades.

Today, the Komondor continues to be a capable guard dog on livestock farms, and they’re well suited to the working life. But, you’re probably more likely to see them in the show ring or in family homes.

The Komondor is, through and through, a guard dog. Their main goal in life is to make sure that their family or flock is safe and sound at all times.

As puppies, these dogs are as playful and affectionate as any other doggo. But, once they reach adulthood, their guarding instincts really kick in. They become quiet and watchful and seem to be more alert than relaxed most of the time.

With their own family members, Komondors are gentle and loving. This includes furry family members, too. In fact, a Komondor may prefer to have cats in the house instead of other dogs. Something about having little furry animals around can trigger a Komondor’s caring nature.

We wouldn’t say that these dogs are overly affectionate, though. Some Komondors certainly can be cuddle pups, but many would rather choose a spot in the room where they can keep an eye on everyone. A true velcro dog, a Komondor is likely to follow you from room to room.

These dogs don’t want to be separated from their flock for any reason, and may become distressed if left alone for too long. To help with the separation anxiety, they would prefer to be left in the care of a dedicated Pet Sitter. That said, Komondors prefer not to have too many strangers encroaching on their territory. If possible, try to choose a consistent Pet Sitter who can build a relationship with this selective pup.

When it comes to houseguests, a Komondor’s default setting is suspicion. It will be important to socialise them early and train them to be polite when you have friends over.

And, if ever the need arises, you can count on this dog to protect the home from intruders without hesitation. They have a booming bark and an eye for trouble. It’s what makes them such amazing guard dogs.

As you probably guessed, Komondors aren’t the most social dogs at the dog park. They can develop aggression towards other dogs, which given their size and power, is dangerous if not treated early.

When it comes to intelligence, the Komondor’s is off the charts. They were bred to be independent thinkers and quick problem-solvers. As such, they need plenty of mental stimulation to ward off boredom.

There are dogs that are difficult to train, and then there’s the Komondor. Intelligent, stubborn, and self-reliant, training this breed takes a lot of patience and consistency.

As with all dogs, of course, Komondor Owners need to push through the training challenges to have a well-behaved companion. With a dog this large and temperamental, training is a top priority.

Here are a few training tips for the Komondor:

When it comes to the Komondor’s energy levels, this dog is a bit of a paradox. On the one hand, they’re not very active dogs, and they’ll be content to lay for hours in watchful silence. On the other hand, they need something to ward off boredom so that they don’t chew, dig, and destroy the home.

The key is to find daily exercise that is engaging for the Komondor without being so strenuous that they turn up their snout at the idea. For most of these puppers, daily walking is the ticket! They love a good brisk walk alongside their Owner or regular Dog Walker, and will gladly walk up to an hour or more daily.

They may also be enticed to play a short game of tug-of-war with you, but don’t expect this big pupper to fetch. They’re not generally interested in retrieval and don’t have much of a small prey drive. So, they will likely just watch you throw the ball and expect you to go get it yourself.

If you’re still looking for a good way to tire this dog out besides walking and interactive play, you might consider agility training. As we mentioned, these doggos love to work and will take direction from a beloved Owner. The mental stimulation and physical challenge of an obstacle course or agility course will be great exercise for this strong dog.

A healthy diet is important for a powerful dog like the Komondor. Source them an all-natural meal plan for dogs and watch them grow into the mighty mops they’re meant to be!

Now, how about living conditions? As we mentioned, the Komondor was historically a nomadic doggo. They were happy to spend their lives on the road and in the fields with their families. And today, this dog still loves to be outside. They should be in a home with a big outdoor space so that they can do what they do best: look over their territory.

There are a couple of other reasons why this dog is better suited to a country landscape than a city centre. One, they’re hyper aware dogs. Living in an apartment complex may be overstimulating to them, especially if they are bothered by the sounds and smells of strangers.

And two, even with enough exercise and mental stimulation, Komondors are vocal dogs. And vocal for a dog of this size is pretty impressive. If they’re going to live in a crowded building, Owners may need to work extra hard to keep their neighbours from complaining about their dog.

​We have one bit of good news to start off talking about Komondor grooming: they’re not big shedders. But, the reality is, shedding is the least of your worries with this labour-intensive coat.

If you’re adopting a Komondor as a puppy, their fur will be soft and fluffy. Beyond regular bathing, your main job at this stage will be to desensitise your dog to touch. A full corded Komondor coat requires frequent touching, so this is a crucial opportunity to get them used to it.

At around 9 to 11 months, their fur will naturally start to twist, which is a good indication that you can start manually cording the fur. This process includes separating large chunks of fur down to the skin to prevent matting. Most Komondor Owners recommend keeping the cords about the size of a thumb-width; too thin and they could fall out over time. Especially as the cords are in the beginning stages, it can be helpful to practice a bit of cording every day.

Komondors should be bathed about once every three or four months. It’s an involved process that includes checking, shampooing and rinsing the cords, section by section. After each washing, the cords need to be squeezed of excess water and may not dry for up to two or even three days. With regular maintenance, Komondors shouldn’t have an overpowering doggy smell.

A corded coat can be trimmed at the preference of the Owner. Generally, the cords in front of the eyes are left in place. Though it may not look like it, a Komondor can see well through those bangs. But, if you’d like to give them a little more of a view, you can shave that area.

Now, if you won’t have the time to deal with the cording process, there are other options. Komondors can be shaved, but keep in mind that they will lose the natural temperature regulation that their long coat provides.

In between baths, Komondors need to be looked over to remove any dirt, spurs or other debris. And, like all puppers, teeth cleaning, ear checking and nail trimming should be done regularly.

The Komondor doesn’t have many health concerns for Owners to worry about. Like most large dogs, they can be susceptible to hip dysplasia and canine bloat. However, they’re generally a healthy breed.

Because of their water-absorbing locks, Owners should be on the lookout for ear infections and fungal hot spots. And, special care should be taken that these fluffy dogs stay at a healthy weight, as it can be difficult to notice weight changes under all that fur.

While Komondors are typically healthy, a reliable pet coverage plan can ensure that they get excellent vet care if the need arises!

Some dogs go viral because they’ve done an amazing trick or have an excellent fashion sense. But Hanga, the Komondor from Lithuania went viral for living her best life. In the short Instagram clip, Hanga can be seen taking her beautifully-kept cords for a swim. To the onlooker, she must have looked like a floating mop or some kind of unidentified river creature.

Either way, her Owner, a dog groomer herself, wasn’t intimidated by the aftercare.

Final Thoughts on the Komondor

For those who have the space, training experience, and time to put into these dogs, they are absolutely incredible. Hard-working, loyal, and distinguished, the Komondor is a dog that will turn heads and melt hearts!

Bad Dog Breath: How to Get Rid of It