The world’s strongest dog breeds are a group of impressive powerhouses! Some are big and bulky while others will surprise you with how much power is packed into such a small frame.

And while they may need some special training so as not to drag you or their friendly Dog Walker down the street, these dogs are sure to muscle their way into your heart.

Let’s take a look at some of these brawny barkers, plus the history as to why they’re so mighty! 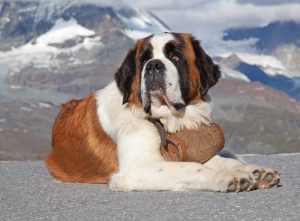 Originally bred to be guard dogs for monasteries in the Swiss Alps, the Saint Bernard’s bulk was useful for warding off intruders. But this dog’s strength really paid off whenever a traveler would get lost on the treacherous mountain passes. It’s no easy feat to shoulder through fresh snow at high altitude, especially when you’re carrying a coat as thick and heavy as the Bernie’s.

Luckily for the lost travelers, the Saint Bernard was powerful enough to come to their rescue.

While not the largest dog on our list, one look at this pup will tell you that they are all muscle. Bull Terriers were bred to have the tenacity of the terrier group with the strength of the bulldog group. The result? A powerful pup that would never give up.

In the early days of the breed, Bull Terriers were used in bull baiting and dog fighting. Eventually, dog breeders softened their personality so that they would be better suited to family life. These medium-sized dogs never lost their muscular build, though!

It’s almost impossible to imagine an 80kg fluffy dog swimming in frigid Canadian waters while pulling in heavy fishing nets and the occasional fallen crew member. And then, somehow mustering up the energy to haul the day’s catch of fish to market. But, for generations, the Newfoundland did just that.

This large, powerful, surprisingly buoyant water dog was used for a range of difficult jobs on fishing boats in the Labrador Sea. They certainly deserved their cuddle with the fishing crew at the end of the day, although we can imagine they smelled terrible.

The Rottweiler is the quintessential strong dog. With a muscular build and a bite force that you would never want to test out, this dog was bred for power. Originally used to drive cattle by the Romans, it’s no surprise that their additional role as protection dogs soon followed. In fact, after their Owners sold their livestock at market, their Rottweiler would carry the earnings in a pouch around their neck to ward off thieves on the way home.

Today, Rottweilers carry on the guard dog title with pride. But, they have a soft side that makes them great family pets as well.

The Tosa Inu doesn’t look much like the other breeds of Japanese dogs such as the Shiba Inu. That might be because this powerful pup is a mix between local breeds and European Bulldogs, Mastiffs, and Great Danes. They were originally bred to be fighting dogs, and quickly stole the title of largest and strongest dog breed from the reigning Akita (another amazingly strong breed, by the way!) when they came on the scene in the 19th century.

Today Tosa Inus, sometimes called the Japanese Mastiff, are still the largest and strongest dog breed in Japan. And while they can be gentle and family-friendly when properly socialised, many countries have restrictions on this powerful pup.

When the Dogo Argentino was first developed in the Argentine province of Cordoba, this pupper was meant to be a big-game hunting dog. Though their ancestors were a now-extinct dog fighting breed, the Dogo Argentino could be trained to work well with other dogs, and they were particularly loyal and gentle with family members.

Today, this high-energy pup is a cherished family pet and watch dog throughout South America. And, they’re among the strongest dog breeds on the continent!

English Mastiffs are likely what you think of when considering the strongest dog breeds. These slobbery doggos are huge and muscular, and they have one of the strongest bite forces in the dog world. Plus, if you need anything carried in a cart, they make excellent drafting dogs.

Australia’s largest dog was an English Mastiff named Baron who weighed 127kg! Despite his size, this burly boy was nothing but love. Up until his passing in 2020, he was a therapy dog who visited schools and hospitals around Sydney. 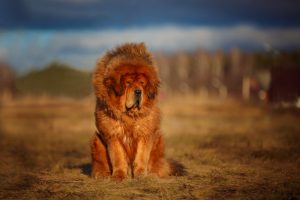 The Tibetan Mastiff is a bear-like dog whose original job was guarding Tibetan temples in the Himalayas. These impressive, regal doggos didn’t often have to show off their incredible strength. Their lion-like appearance was enough to warn strangers to keep their distance.

Why is the Tibetan Mastiff #1 on our list of strongest dog breeds? Because they’re typically considered to be the origin breed for other mastiff dogs across the world. The Romans had a mastiff type dog called the Molossus which is believed to be from Asia, and from that pup, we get the modern day English Mastiff, Rottweiler, and even the tiny Pug.

What does it take to care for the world’s strongest dog breeds?

As you can see, the dogs on our list were all bred for different purposes. Some were fierce fighters, others were furry rescuers, and many were skilled hunting companions. And that’s led to a wide variety of personality types. But, there are a few things you can be sure comes with the territory of owning these powerful canines:

Not everyone has what it takes to care for powerful puppers like these. Would you be able to step up to the challenge of owning one of the world’s strongest dog breeds?