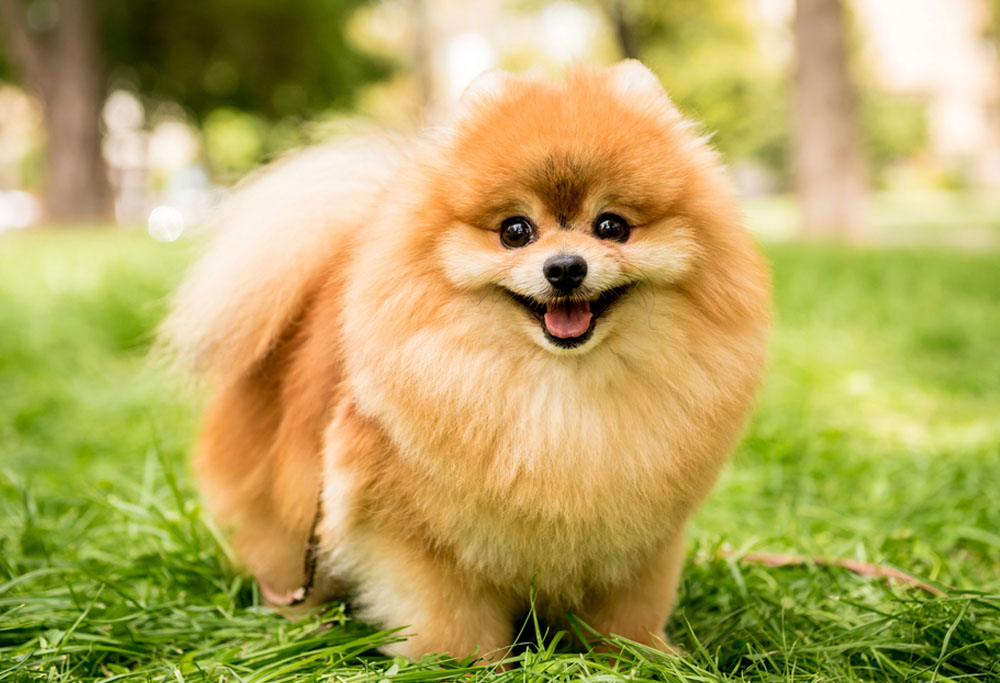 The Pomeranian is here to prove that more fluff means more personality! Learn about the history, exercise needs, and grooming requirements of this little, loveable fluffball. Does your Pom Pom need some primo care while you’re away? With Mad Paws, you can find Pet Sitters in Toowoomba, Perth, Geelong, and all over Oz! 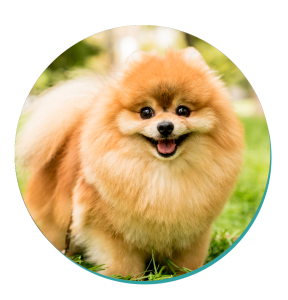 Why does the Pomeranian look so much like a fox? When did they get so small? And can the name Pomeranian tell us something about the origins of this breed?

Let’s start with this small dog’s looks. In appearance, the Pomeranian isn’t very similar to other lap dogs that have been pup-ular with European royalty for centuries. In fact, they look more like miniature foxes or wolves than the highly esteemed Cavalier King Charles Spaniel or the Bichon Frise.

But, those triangle ears, pointed snout, and high-set curly tail do tell us something important about where this dog comes from. They’re key characteristics of dogs in the Spitz group! The Spitz group includes Siberian Huskies, Samoyeds, and even the Akita. And a side-by-side comparison between these doggos and the Pomeranian make it clear that our little fluffball is related to these northern working dogs.

So, how did the Pomeranian go from the size of a hulking Malamute to the small dog we know today? Well, for much of their history, Pomeranians weren’t small. They were large enough to pull sleds, guard livestock and herd sheep in the Nordic region, Iceland specifically. These pre-Poms were all white, weighed about 14kg, and didn’t have an official name yet.

At some point, the Pomeranian made its way south to the European continent. Its new home was called Pomerania, a region along the Baltic Sea that is now Poland and Germany. Here, dog breeders started to miniaturise the breed, while keeping that glorious halo of fluff, of course! Interestingly, breeders never were able to eliminate the gene for large Poms completely. Even today, the gene will sometimes make a surprise appearance in the form of a “throwback Pom.” These unexpected pups are closer in size and composition to the Pomeranians of yesteryear.

With each new generation of mini Poms, it became clear that these dogs wouldn’t be working in the fields or tundras anymore. Unbeknownst to them, they were actually on their way towards royalty, when a young girl from Germany married King George III. Queen Charlotte left her home for England, bringing with her a pack of beloved Pomeranians.

Pom love was passed down through generations. Queen Victoria, for instance, proudly showed her Pomeranians in the prestigious Crufts Dog Show in 1891. Her proud pups won, but perhaps they had the advantage of being shown by the Queen.

Over their history, Pomeranians have flourished in frigid tundras, royal palaces, and in family homes around the world.

While Pomeranians may have been miniaturised over generations, it seems that breeders never tamped down on their big personalities. Poms are known for being bold, confident, and playful. And, for anyone who has never spent time with a Pomeranian, their zest for life can be a big surprise.

When it comes to other dogs, a well-socialised Pom will be friendly and ready to meet any pup who crosses their path. Pomeranians have no idea that they’re small, which can sometimes get them in trouble. It’s important to supervise introductions with larger dogs, who may see Poms as prey.

Highly intelligent and with a mind of their own, Poms tend to think of themselves as the rulers of the household. We’ll talk in a moment about teaching these pups to reign in their domineering personality, but Owners should be prepared for a dog with plenty of self-esteem.

Pomeranians can be excellent family dogs, but there are a few things to watch out for. One, these are small pups and should always be handled with extreme care by children. And, while they’re not as quick to snap as some other small dogs, Pomeranians can become defensive when they’re feeling overwhelmed. It’s important to teach kids how to play gently and respectfully with Pomeranians to ensure that everyone stays safe!

These little fluffers are loyal to no end and never want to be left out of the fun. Luckily, their travel-size stature and love for adventure make Pomeranians great co-pilots. And with enough training, these dogs can even be wonderful therapy dogs, sharing their bright and bubbly personalities with school children and hospital patients.

As with all small dogs, training is absolutely essential. Without socialisation, training, and confidence-building, Poms can develop Small Dog Syndrome and fear-based aggression.

Understandably, the Pomeranian’s small size can pose unique challenges for Owners. After all, if you’re not sure how a large dog is going to react to your Pom, the reasonable reaction is to pick up your pup and keep them out of harm’s way. Likewise, a stubborn Pom who is struggling with crate-training can be easily picked up and placed inside. But, this avoidance of socialisation opportunities and proper training can reduce a Pom’s sense of autonomy and confidence.

Here are a few tips to train a Pomeranian despite their tiny size:

Pomeranians have a reputation for being hard-headed and difficult to train. But in reality, these are puppers with a working background and people-pleasing attitude. With some special considerations for their size, they can learn commands at the same rate as any other doggo.

Pomeranians may look like pampered pups, but in reality, they’re energetic, playful, and not afraid to get dirty. These dogs need more exercise than some other pups of the same size, and without it, they may just drive you up the wall.

Luckily, managing a Pom’s energy levels isn’t too difficult. They love games of all kinds and don’t need too much space to tire themselves out. Make sure to fill their toy basket with small dog-friendly balls and tug-of-war toys so that you can get them running around a few times per day. These smart pups also love indoor games like obstacle courses or agility training.

Of course, all puppers do need some daily outdoor playtime, and outdoor activities are the best way to burn off that Pomeranian energy. They love walkies and outdoor games of fetch. And trips to the dog park are always welcome.

Though it might surprise you, Pomeranians are water-loving doggos, and will seek out streams, pools, and even small puddles of mud. And thanks to their Nordic roots, Poms love snow. It’s a joy to watch them romp around in a fresh snowfall. If you’re not able to get this little pup up to the mountains, they’ll happily roll around at a sandy beach instead.

As we mentioned, Pomeranians are prone to separation anxiety, and shouldn’t be left at home alone or in the backyard for long stretches. One option is to get your Pom a pal. Owners of this breed often have a possy of Poms and that’s because, well, they’re adorable, but also because they do a great job of keeping each other company.

Finally, we should note that while Pomeranians are the perfect size for apartments, they don’t make the best neighbours. Pomeranians can be very vocal, and may attract a few noise complaints if your neighbours are not fans of the breed. Of course, keeping up with regular exercise and mental stimulation will go a long way in calming down this barking pup.

​You don’t get the glamorous puff of a Pomeranian without some regular grooming practices. And even if you take your fluffy pup to the groomers as recommended—every four to six weeks—there are still a few tasks to do at home.

For one thing, that double-coat needs to be brushed and combed regularly. This will require at least two specialised tools: one for the thick underlayer and one for the wispy outer coat. Pomeranians can become matted quite quickly, so you’ll want to groom them at home at least once every couple of days.

Pomeranians can also develop some face staining, so they also need a clean with a dog-friendly wipe or warm cloth daily. This may also be necessary for other parts of their coat that track mud, dirt, and water through the house.

Finally, there are the standard grooming needs of most puppers: nail trimming, tooth brushing, and checking those adorable fox ears for infection.

There aren’t too many health concerns prevalent in Pomeranians, but the most common include:

As with all small dogs, Pomeranians are at high risk of injury from rough handling or run-ins with larger dogs.

And, because of that long coat, unhealthy changes in weight can go unnoticed. It’s important to meet this dog’s activity needs, feed them a highly nutritious diet, and schedule regular visits with their vet.

Fun Fact about the Pomeranian ♥

Rumor has it that famous painter Michaelangelo had a Pomeranian! This pampered pup supposedly sat on a satin pillow alongside the Renaissance painter as he worked on the Sistine Chapel.

But this isn’t the only time that Pomeranians have witnessed major historical events! Lady, a Parisian Pomeranian, and another Pom, whose name was never recorded, were on board the Titanic when the disastrous shipwreck took place. Lucky for these little Poms, they were small enough to be wrapped up and carried by their Owners on some of the few lifeboats.

Final Thoughts on the Pomeranian

Pomeranians have a wonderful way of sharing their joy with the world. Always smiling, running around, and ready to make friends, Poms are fluffy little balls of energy that are sure to brighten your day.

As small pups with big attitudes, they do require a good amount of training, socialisation, exercise, and personal attention. Prone to separation anxiety, they should spend most of their time with family members, other dogs, or a Dog Sitter.

If you’re ready to share your home with a centre-of-attention, impossibly fluffy ray of sunshine, the Pomeranian is sure to be a lively companion!

Do Dogs Get Jealous?