Take a walk on the wild side with this hybrid cat! The Savannah Cat will awe you with its gorgeous appearance and surprising personality. Whether you need a Pet Minder in Sydney, Hobart, or elsewhere, Mad Paws can connect you with a Savannah-friendly Sitter. 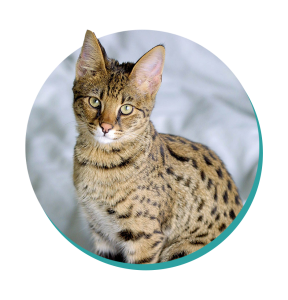 Judging by the Savannah Cat’s wild appearance and personality, you might assume that breeders simply plucked a feline right off the plains of Africa. And to be honest, the history of this breed isn’t too far off.

Back in the mid 1980s, a cat breeder in the United States, Judee Frank, had taken into her care a Serval cat named Ernie. To Judee’s surprise, one of her other cats, a Siamese, had a single kitten by Ernie. This first known F1 kitten took the name “Miracle”.

Miracle’s Owners changed her name to Savannah (perhaps to reflect the African savannah heritage) and so began a new cat breed. Much of the Savannahs’ early breeding is credited to Joyce Sroufe and Patrick Kelley, who established the breed by 1996. Shortly thereafter, they submitted the breed standard to the International Cat Association (TICA). TICA then formally recognised the cat breed in 2012.

However, other than the specific breeding lines, there is much to be said about the history of the Savannah Cat. With this in mind, let’s take it back to where it all started, a few thousand years ago in Africa.

As early as 1300 BCE, humans traded Serval cats in Ancient Egypt, along with other exotic animals. They appear in Egyptian art depicting mythologies and legends, which suggest that they held a special place in the hearts and minds of Ancient Egyptians.

Despite their place in Egyptian lore, Serval cats were never domesticated. In general, you would find them in Sub-Saharan Africa, where they would thrive as hunters in savannahs and plains.

It wasn’t until the last century or so that Servals reached other continents specifically for breeding programs. Today, they are not on an endangered species list, but there is some controversy about using them for the breeding of Savannahs.

Savannah Cats themselves are not available everywhere. Some countries have strict guidelines about owning Savannahs because of their close connection with wildcats. Indeed, they are such skilled hunters that many countries worry about Savannahs escaping and wreaking havoc on local wildlife. Since 2008, Australia has joined the list of countries with a complete Savannah Cat ban.

It’s no surprise that a Savannah Cat doesn’t display domesticated cat personality traits. You probably won’t find them snuggling up on their Owner’s lap or waiting patiently for food or treats. Instead, this is a cat with a personality that allowed them to thrive for thousands of years in the African plains.

The most obvious example of this is with the Savannah’s hunting drive. And to understand it, let’s loop back to the Serval. Several adaptations make the Serval an excellent hunter. This wildcat has larger ears than other felines for better hearing. They’re sometimes called “giraffe cats” because, out of all felines, they have the longest legs in proportion to their bodies – better for walking through tall grass, jumping to catch birds, and digging for ground prey. They also have the perfect camouflage as well as special eye markings that reflect light for better vision.

These advantages allow the Serval to successfully catch 10 to 20 meals per day. Unlike other feline species with a success rate of 1 in every 5 attempts, Serval hunts are successful about half the time.

So, you can probably guess what happens when you cross one of the world’s best feline hunters with a domestic house cat. You get a hybrid that is energetic, motivated, playful, stubborn, focused, adventurous, and persistent. It’s a mix of traits that would overwhelm anyone save for the most experienced Pet Owners.

Of course, the personality of a Savannah Cat cannot be boiled down to just the Serval. The early Savannah breeding programs relied upon Turkish Angoras, Siamese, Ocicats, Oriental Shorthairs, Egyptian Maus, and Domestic Shorthairs to provide these hybrid cats with some toned-down qualities. As a result, we can enjoy a Savannah that is more sociable, friendly to strangers, playful, curious and affectionate.

The Savannah Cat is often called the perfect breed for “dog people.” We couldn’t agree more. This cat wants to be with their beloved Owners, and they’ll follow their two-legged family members from room to room. While they may not cuddle up on your lap, they’ll never be out of reach. In fact, they’ll do whatever they can to grab your attention, whether it’s knocking things off of shelves or jumping from ledge to ledge to show off their super speed.

Savannah Cats are curious about new people, which can be off-putting for some. If you’re expecting company, it’s best to warn any newcomers that your wild-looking Savannah Cat will likely approach them, sniff them, and maybe even try to play.

One thing to keep in mind is that an F1 Savannah Cat may have a much different temperament than an F7. F1 Savannahs are cats that come from a Serval and a domestic cat and will have more of the wild personality traits than F2s, F3s and so on.

In between walks, Savannah’s are the perfect breed to push the limits of feline training. Although they can be pretty independently minded, they love attention and are very food motivated. Those are the perfect qualities for a cat to be able to learn much more than simple commands.

Savannahs learn best with short, frequent training sessions and lots of positive reinforcement with verbal praise and treats. Repetition and consistency are key to training a Savannah.

A good place to start is with the basic commands that will teach your Savannah Cat proper boundaries and household manners. Because they’re such assertive cats, this stage of training should focus on teaching them to stay away from hazardous situations. For example, they can climb onto the kitchen counter where they might expose themselves to open flames or sharp objects.

Another key training goal is to keep Savannah Cats from trying to rush out the door. Providing a Savannah Cat with a designated place to sit when they hear the door open and then giving them their favourite treat is a great way to lower the risk of this adventurous feline escaping.

You can learn more about the early stages of Savannah Cat training by reading our article on how to Raise a Kitten the Right Way. Once you’ve established the basic commands, your Savannah will look forward to more fun and interesting training sessions.

Again, this harks back to the Serval ancestry. The territory of a wild Serval can range anywhere from 6 to 20 square kilometres. That means that they’re accustomed to traveling large distances looking for food and fresh water.

While a domestic Savannah probably won’t try to claim 20 square kilometres as their personal territory, they still feel that need to roam. Savannahs love to be taken for walks on-leash, and they’ll even splash around in an outdoor pool.

Just like any dog breed, Savannah Cat Owners will often schedule Dog Walkers to take their cat out for some daily exercise.

Setting up the perfect living conditions for a Savannah Cat can be tough. On the one hand, they’re fairly large cats with a whole lot of energy and wild instincts. That will make it more tempting for them to shred up your curtains, knock down all of the picture frames from the shelves, and cause other damage to your home.

To avoid Savannah mayhem, it’s best to make some structural changes. Give them spaces where you want them to spend their time. Special carpeted shelving, large cat trees, catios, and other cat-friendly spaces will draw their attention away from your valuables.

Another consideration with a Savannah is that they must be indoor cats. This is imperative. Because of their high hunting drive and excellent hunting skills, Savannahs are a huge risk for natural ecosystems. Most Owners find that they may have to reinforce their homes to prevent escape. You can do so with child-safe doorknobs and strong window screens.

Of course, these living conditions will only be effective in protecting natural wildlife and your home decor when coupled with adequate exercise and mental stimulation.

Many experts proclaim the Savannah Cat to be one of the healthiest domestic breeds available. At the same time, there are a few things to keep in mind.

On the one hand, Savannahs must come from responsible breeders. Because this breed is so expensive and difficult to come by, some breeders will offer lower-cost Savannahs to appeal to more customers. This is a bad sign; many of these low-cost kittens don’t receive proper screening for genetic issues.

Another health concern for the Savannah Cat is nutrition. Over generations, domestic cats have adapted to store-bought cat food. However, that might not be enough for a cat that depends on fresh protein. In fact, some sources suggest that Savannahs are at higher risk for taurine deficiency, a vitamin found in meat. They may benefit, then, from a high protein, low carb diet, such as they would find in the wild.

Maintaining a healthy weight can be an additional challenge with Savannah Cats. On the one hand, this breed may require more food than the average domestic cat. At the same time, they have such high energy needs that obesity is a risk. It may take some time and effort to find the right diet and exercise balance. If you feel like your Savannah is packing on the kilos, take a look at our article How Can I Help My Cat Lose Weight?

The Savannah Cat is a breeze to groom. Weekly brushing with a short-bristled brush will do the trick, and you don’t need to worry about bathing, although you can bathe them is your Savannah loves water.

One thing that you will want to add to your grooming routine is regular nail clipping. Again, the closer a Savannah is to their wild ancestors, the more hunting, climbing, and scratching your home may have to endure. Luckily, when you start with nail clipping early, you’ll be able to minimise the damage.

Savannah Cats have a wide range of fascinating vocalisations. From their domestic lineage, you will hear the familiar meowing and purring from Savannahs. But there are a few more surprises, too.

Many Owners report distinctive wailing, yowling, yelping, and chirping. There’s even some characteristic chattering and barking.

And when a Savannah’s mood sours, they’ll rely on hissing, sighing, and growling to get their point across. While that may sound intimidating, you need not fear. Indeed, most Owners will tell you that a Savannah Cat will break out the Savannah Hiss or Serval Hiss when they’re annoyed or frustrated, not when they’re ready to attack. It’s best to warn guests and Pet Sitters about this interesting feature.

Final Thoughts on the Savannah Cat

This isn’t a cat for every Cat Owner. Unfortunately, some are so enchanted by the Savannah Cat’s unique appearance that they don’t learn more before bringing one home. What’s more, these cats are so rare that it’s not common to spend time with one before making the choice to adopt one.

In reality, though, the Savannah Cat requires more attention, more exercise, more rules, and a more strict diet than other domestic cats. Every cat breed will require good ownership practices, of course. But the Savannah Cat is what you might call a high maintenance breed in comparison.

That said, for those who have experience with high energy cats and are willing to put in the time and effort, the Savannah Cat is just as enchanting and awe-inspiring as you would expect. With their dog-like qualities and feline grace, this is a breed that is amazing to have around.

4 Ways to Prepare Your Dog for the Next Decade