In this Dog Breed Corner, we cast a discerning eye at the Queen’s favoured breed of canine: the Welsh Corgi. Learn about the  Welsh Corgi’s personality traits, history, trainability, living needs, and more! Do you need someone who can give your Welsh Corgi the royal treatment? With Mad Paws, you can find Corgi-friendly Pet Sitters on the Gold Coast, Adelaide, and all ’round the nation! 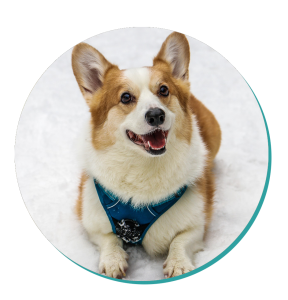 There’s a lot to the story of the modern-day Corgi. With Celts, doppelgangers, fairy tales, cattle herding, and life in the Royal family, there’s more adventure packed into this short-statured pup than meets the eye!

We’ll start with the tale of the Celts and the Corgi doppelgangers. To do so, we have to go back to 1200BCE. At this time, the Celtic population was migrating to Wales, specifically to a region called Cardigan. When they arrived, they brought with them materials, livestock, and dogs. As the Celts settled and started herding cattle with the help of these pups, the Welsh Corgi was born.

It wasn’t until much later, 1100 AD, that the Pembroke Welsh Corgi would come onto the scene. This little corgi-looking pup travelled to the Welsh city of Pembrokeshire on the ships of Flemish weavers. These craftsmen had been invited on behalf of King Henry I, who had sent his talent scouts across Europe to entice the best weavers to relocate to his kingdom. They could, of course, bring their dogs.

All of a sudden, there were two Corgi-like dogs living in Wales. In an attempt to differentiate them, the earlier Corgi was called the Cardigan Welsh Corgi and the new one would be known as the Pembroke Welsh Corgi.

The Pembroke Welsh Corgi and the Cardigan Welsh Corgi were bred to accomplish the same task: cattle herding. Herders wanted an intelligent, energetic dog with short legs to avoid dangerous kicks from the cows. And because no one at this time was too preoccupied with setting a breed standard – and because the two dogs looked so similar- Pembrokes and Cardigans were interbred without a fuss.

Now, if you’ll allow us a momentary detour, there’s something to clear up about the etymology of the Welsh Corgi. What does “corgi” mean? As it turns out, “corgi” comes from the Welsh word for “dwarf” and “dog.” It’s another way that we can know that these doggos have been little from the start!

Much, much later, in 1928, the UK Kennel Club would finally make the decision to separate the two breeds. And in 1934, the AKC would follow suit. The split holds today, although many Corgi lovers would say that both are just as lovable as the other. Queen Elizabeth II, though, would prefer the Pembroke variety (more on that later!)

But before we move on from Corgi history, we promised you a fairy tale! And the Celtic Corgi myth is one you won’t want to miss.

The story goes that, one day, two children were out in the field taking care of the family’s cattle. They came across two fox-looking puppies abandoned in the field, and decided to bring them home. They would find out that these Corgis were actually gifts from the fairies, who would ride these little puppers into fairy battle or use them to pull their fairy carriages. As the myth goes, the light colouring on the shoulders of a Corgi hark back to the days when they wore saddles for their fairy riders.

While this myth has fallen to the wayside, the popularity of the Welsh Corgi has not! This is a popular dog breed all over the world. They’re highly adaptable to new settings and their small size and big personality make them well-suited to both city and non-city lifestyles.

They’re a pint-sized pooch with the heart of a lion! This is a confident, assertive doggo that doesn’t know just how small they are. Because they were bred to take on animals much larger than themselves, they’re not afraid of much. What’s more, they can become protective over their Owners and territory.

Corgis also love to be in the centre of the action. That might mean that they’re right in the middle of the couch when you’re trying to relax and watch television, or they’re sneaking their way out the door to follow you to the car. This is a pup that demands attention, and when properly socialised, they’ll be friendly and outgoing with new people and other dogs.

Without a proper manners check, though, their controlling nature can quickly turn nippy and unpleasant. This is especially concerning when kids are involved, which is why some families don’t consider this to be the best family dog. But, if you’re able to put in the effort for socialisation and training, the Welsh Corgi can make an excellent family pet. We’ll talk in the next section about proper training techniques for this rambunctious dog.

Welsh Corgis are as playful as they are smart. Because of that, they’ll rely on a number of tactics – including that large bark of theirs – to entice anyone to play with them. Many Corgi Owners choose to own more than one of these little pups so that they can entertain each other. A better option, we would argue, is to ensure that you’re able to give this attention-seeking pup as much facetime as they need to be happy as a single pet. From there, the more the merrier!

If it’s not clear already, the Welsh Corgi needs a firm training plan to prevent them from becoming and domineering force in the household. But, this doesn’t mean that you should take a strict or harsh approach to training. Instead, your Corgi will be much more engaged and excited to play along if your training sessions speak to their herding dog nature and unique personalities.

Corgis love to be loved by their Owners, which is why positive reinforcement training is so effective with these pups. When you make them feel like a superstar for doing the right thing, they’ll quickly drop the stubborn attitude.

Because these pups may take a bit longer to learn new commands and tricks, trainers must be patient and consistent when working with Corgis. Even after this dog has mastered the basic commands, they will still require regular refreshers so that they don’t forget their manners or fall into Small Dog Syndrome.

Early socialisation is also a must for a Welsh Corgi. Giving them the chance to interact calmly and positively with strangers and other animals will ensure that they grow up to be polite and friendly.

Don’t fall into the trap that little legs equal low energy. Welsh Corgis can give some of the much bigger dog breeds a run for their money. Corgi Owners need to ensure that these little pooches get enough daily exercise to keep them from becoming destructive, whiney, and loud in the house. Sufficient exercise will also help them to overcome their deep-rooted herding instincts.

Because of their small stature, Corgis do tend to tire out more quickly than some larger doggos. So, it’s a good idea to give them shorter, more frequent exercise sessions rather than a long walk. If you need help breaking down the exercise routine into smaller chunks, calling in an experienced Dog Walker is a great option.

Despite their high-octane pep, the Welsh Corgi can adapt to apartment living if they receive their daily exercise. Like all dogs, they will love any outdoor space that you can give them, but even with a backyard, this dog will still need extra exercise outside the home.

Do remember that this is a doggo with a loud bark, so they may not be appropriate for quiet apartment buildings.

Due to their short legs, there are a few changes that you can make around the house to make your pup more comfortable and safe. Ramps are a great way to allow your Corgi access to their favourite snuggle spots without putting them at risk for falls. These accommodations will become even more important as your Welsh Corgi gets older. For more tips on how to care for an aging Corgi, make sure to read our article on How to Help Your Dog Age Gracefully.

As with many dogs that hail from the cold north, Welsh Corgis sport a thick, fluffy coat. While that fur is short, these dogs shed heavily, and the best way to keep the fur from taking over your home is with regular brushing. In general, about ten minutes of daily brushing or less is sufficient to keep ahead of the fur storm.

Bathing on the other hand, shouldn’t take place more than once every few months.

The Cardigan Welsh Corgi can have longer hair than the Pembroke, but grooming isn’t too different. Don’t make the mistake that some Owners do of trimming their Corgi during the warmer months. Those longer coats may look hot, but that hidden under coat will keep your Corgi cooler than you think. When bathing a long-haired Cardigan Corgi, make sure to buy special shampoo for long-haired dogs and rinse it completely.

Other grooming tasks such as dental care, ear cleaning, and nail trimming should be done regularly to keep the Welsh Corgi healthy and beautiful.

When fed and exercised properly, Corgis are a healthy breed. But there are a few things to look out for in this breed:

This list of issues are common in many dog breeds, but there are a few more that are unique or particularly significant to short-limbed and long-spined dogs like the Welsh Corgi. For instance, Intervertebral Disc Disease is related to ruptures in the spinal disc due to the Corgi’s long spine. Degenerative Myelopathy is another spine-related disease that can cause pain, discomfort, or loss of feeling in the lower back.

Obesity is another issue that is particularly dangerous to a breed like the Welsh Corgi. The extra weight is extremely hard on their frames; even a kilo of weight gain can cause significant discomfort and related health issues.

Welsh Corgis are food-motivated dogs, so it’s very important to make sure that they maintain a healthy weight and get plenty of exercise.

Queen Elizabeth II has long been known as a corgi-loving ruler. In fact, we’ve compiled a list of facts about the Queen’s Corgis so that you can learn all about these little Pembroke royals!

But if you were sad about the Queen’s last remaining Welsh Corgi passing away in 2018, don’t fret. According to reports, she still has at least one adorable dorgi – Dachshund Corgi mix – to keep her company.

Because we would never want to finish on a sad note, we’ve got another Corgi fact to lift your spirits. Would you believe us if we told you that the Welsh Corgi is closely related to the Siberian Husky? It’s true! These dogs both belong to the spitz group from Northern Europe. You can tell by their pointed ears, wolf-like muzzle and thick coat.

Final Thoughts on the Welsh Corgi

Plenty of personality and confidence packed into those little legs, the Welsh Corgi is here to make a statement. The boldness and unique personality of this tiny doggo will leave quite the impression, and Corgi Owners tend to be loyal (just ask the Queen!)

These puppers require quite a bit of training and patience so that they don’t fall into small dog syndrome habits. But provided they receive early training, they’re a wonderful family dog that will get along with children and other dogs.

These dogs are at risk for some specific health concerns, which means that Owners should be proactive about healthy habits. When properly cared for, these dogs can live a full and happy life.

If you’re looking for a dog who is happiest in the spotlight, you’re going to love this attention-seeking pup. A Welsh Corgi will keep you laughing, and if you’re not careful, they’ll run the household!

What Happened When We Took Dogs to Sydney Domestic Airport