Looking for a cat with a storied past and cuddly personality? The Chartreux is here to steal your heart! And if you require a Chartreux Cat Sitter on the Gold Coast, Bendigo, or elsewhere in Australia, you need look no further than Mad Paws. 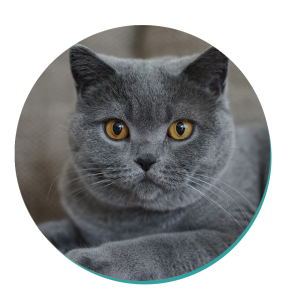 If you’ve been waiting for a Cat Breed Corner History with knights, the idyllic French alps and a monastery with dubious dealings, the legend of the Chartreux Cat will not disappoint.

The story begins with at an ancient monastery called La Grande Chartreuse, tucked away in the French alps outside of Paris. The monastery was built in 1084, but it was sadly empty of cats until around the 13th century. Imagine living for over 100 years without cats – what a loss.

In the meantime, the Crusades were raging in Northern Africa. It was a dark time in European history, and when the knights returned home, all they wanted was some peace and quiet – and a chance to cuddle with the adorable kittens they brought back with them from Africa. Our La Grande Chartreuse afforded them some tranquility, and the monks even let the knights bring their cats.

Even if the knights didn’t find a permanent home at La Grande Chartreuse, their feline friends did. The monks appreciated that the cats had a naturally soft meow that wouldn’t disturb their meditations.

The cats had another job, too. Because beginning in the early 1600s, the monks at this monastery started to make their own liqueur, or as they called it, “The Elixir of Life.” The recipe is so well-kept that not even raids during the French Revolution could shake out the secret instructions.

Where were the cats in all of this? Keeping the cellars free of mice and other pests. Chartreuse is a liqueur that requires 130 different types of plants and herbs, so it was crucial that the cats could keep the place free of little animals looking to munch on some greens.

The modern history of the Chartreux Cat doesn’t have quite the same storybook edge, but let’s march along, shall we?

In the 1920s, these soft-voiced, blue cats had made their way to a small island off the coast of France, called Belle-Île-en-Mer, or literally Beautiful-Island-on-the-Sea in English. Two cat-loving sisters – the Leger sisters – started to breed the cats and exhibit them throughout France.

WWII was hard on the breed, and by the time it was over, Chartreux Cats had to be crossbred with several other breeds – British Shorthairs, Persians, and Russian Blues – to keep the line alive.

One cat that was 100% Chartreux made its way to the US around 1970 to start a brand new breeding program for the Americas. Today, they’re still rare but are becoming increasingly popular.

Maybe it was the hundreds of years living alongside Monks that made these cats sweet-tempered, loyal, and gentle. They love the company of humans and are always ready for a snuggle. In fact, if you’re looking for a lap cat, the Chartreux Cat is your breed.

These felines form strong bonds with their Owners, and they’ll follow you around wherever you go. Even with other humans, such as their trusty Pet Sitter or a guest of yours, they’ll warm up quickly. In fact, this is an ideal family cat. As long as you’re mindful about introducing your cat to babies and small children, the Chartreux will be happy to live in a full house.

The Chartreux also has a playful and energetic side. They love games, and they’ve even been known to enjoy a good game of kitty fetch. When they’re not curled up in their beloved Owner’s lap, these cats are probably poking around the house, looking for something to play with and chase.

Chartreux cats are known to be very quiet – even silent – but don’t think that they won’t learn how to communicate with you! This is a social and intelligent cat with plenty of ways to get your attention – wily games, a forceful headbutt, and they can learn to turn lights on and off.

But even with their cleverness, this cat is a joy to have around. They’re easy-going, sweet, quiet, and loving. And you won’t ever have to worry about a pest problem with these silent hunters in your midst.

The Chartreux is a very trainable cat. With its love of humans and its super high intelligence, you’ll be able to put that myth that cats are untrainable to rest. Most Cat Owners will say that their cat will respond every once in a while to their name, but not the Chartreux. This cat will be at the ready whenever you want to have a training session.

Whether it’s puzzle games, learning new tricks, or a fun game of hunt the toy, a Chartreux will be engaged and focused.

A good place to start with your Chartreux cat is to find out what they really like. Is it a favourite mouse-shaped toy? A special treat? A loving pat on the head? That’s going to be the basis for your reward system, so make sure that you give your spend some time learning what your Chartreux really likes.

From there, start exploring! Your Chartreux will learn basic commands, like sit, touch, and lay down, in no time. Then, you might try out more complex tricks like sitting up like a meerkat, jumping through your hands, rolling over, and more.

The key to training your Chartreux – and any cat, really – is consistency. Your Chartreux will start to look forward to your daily training sessions, and when they don’t get that mental stimulation, that’s the recipe for mischief. Chartreux tend not to be very destructive cats, but they will find other ways to capture your attention if you don’t make training a regular part of their schedule.

These cats are happy in pretty much any living conditions you throw them into. They’re also friendly with dogs and other cats, although this isn’t always the case. They get along with humans of all ages. And they won’t get upset if you invite your friends over.

If you want to make your Chartreux’s living condition dreams come true, provide them with plenty of places to play and explore. These kitties were bred to roam the large monastery grounds, looking for mice and accompanying their favourite monks throughout the day.

As such, these cats will be happiest if they feel like they have ownership over the entire house. They’ll want to follow you from room to room. They’ll want high-up spaces where they can scan the territory for rodents. And they’ll want plenty of cozy areas to snooze, preferably within reach for under-the-chin scratches.

One of the best ways to achieve pure Chartreux bliss is to provide them with plenty of opportunities to socialise. They may not yowl or destroy your home while you’re away, but these kitties love company. They won’t be their usual chipper selves when they’re left alone for long stretches.

You can solve the problem by bringing in a loving Pet Sitter, or exploring the idea of introducing another animal into the house.

Something else to watch out for is the Chartreux’s desire to roam outside. The Chartreux is the perfect candidate for leash-training, and your cat will love to walk around the neighbourhood with you. Other ways that you can design your home with the Chartreux in mind is to install a catio in the backyard or keep the blinds open with a few posts or ledges for your cat to watch the show.

Make sure you always supervise your kitty outside, because, even more so than other breeds, this cat loves to hunt. Read more about how to keep your cat from attacking wildlife to help manage your Chartreux’s hunting instinct.

One interesting thing about the Chartreux is that, although it was isolated for much of its history, it’s a generally healthy breed. That could be due to the frequent crossbreeding practices after WWII, which is a relief for Cat Owners today.

Of course, all cats are prone to some genetic diseases, and in the Chartreux, you want to be on the lookout for polycystic kidney disease and medial patellar luxation.

The Chartreux is a pretty active cat, so you may not have to worry too much about obesity, but keep an eye on it! These kitties have the unfortunate and adorable nick-name of “potato on toothpicks,” so it’s best to help them maintain a healthy weight.

As with any cat, the best way to keep your feline friend healthy and happy is with regular vet checkups, proper nutrition, and regular exercise.

As if the Chartreux could be any more loveable, this breed is also a breeze when it comes to grooming.

This gorgeous cat has a blue double cat which produces low to moderate shedding. To keep that coat nice and beautiful, you’ll need to comb it, not brush it. This will keep your cat tangle-free and soft, all year long.

The Chartreux does shed the undercoat about twice a year, so shedding will pick up when the temperatures change. Just make sure to keep a comb handy to get all of that extra fluff before it falls off your cat.

For other Chartreux care, the simple basics are all you need. Nail trimming; checking for parasites around the ears and neck; wiping the eyes; and an occasional teeth cleaning will all about do it for your Chartreux grooming routine.

The Chartreux cat is the official cat of France, and the breed has shown up throughout French history.

In 1747, French artist Jean-Baptiste Perronneau, painted the aristocrat, Magdaleine Pinceloup de la Grange, with her beloved (and cranky-looking) Chartreux. The fact that the cat was still for the long painting process is a testament to their relaxed, cuddly nature!

The Chartreux also earned the affection of French Army officer Charles de Gaulle; the national hero owned a cat named Gris-gris, or Gray-gray, which is just too adorable. Another Chartreux fan was the French author Colette, who wrote the breed into one of her early short novels. Not only was the cat in the book, but she also provided the title: La Chatte. This phrase translates to simply “the cat”, which was what that author called her own Chartreux.

But it’s not just in France that this feline has enjoyed fame. If you attend the Montreal International Jazz Festival, for example, you’ll see that the Chartreux has made waves overseas, too.

Meet Ste. Cat, the official mascot of the Montreal International Jazz Festival. Rue Sainte Catherine is the main street for this musical event so Ste. Cat is just the perfect play on words. On posters, t-shirts, and etched onto guitars and other musical instruments, Ste. Cat reps the coolness of the Chartreux cat.

Final Thoughts on the Chartreux

Every time we reach the end of a Cat Breed Corner, we’re convinced that we’ve just summarised the best cat in the world. But this time? It might actually be true!

The Chartreux is a social, gentle soul who just wants to climb into your lap and nap the afternoon away. They are almost entirely quiet, have low grooming needs, and tend to be very healthy. And they can learn to fetch, walk on a leash, and do a variety of tricks.

They are simply merveilleux – which Google Translate tells us means marvelous in French.

If you’d like to adopt a Chartreux, remember that this is a rare breed that might be difficult to find. Always go through proper channels and responsible breeders so that you end up with a happy, healthy ethically-bred kitty.

And, don’t forget that they have high social needs. This is not a cat who will be happy alone or ignored. They demand attention, cuddles, and plenty of playtime. And they deserve it!

Why Does My Dog Rest Their Head On Me?