We’re digging up the facts on one of Australia’s few dog breeds: the Tenterfield Terrier! Learn about this dirt-loving pup’s history, health, and trainability. For a Terrier-centric Dog Minder in Brisbane, Bendigo, or elsewhere in Oz, check out Mad Paws! 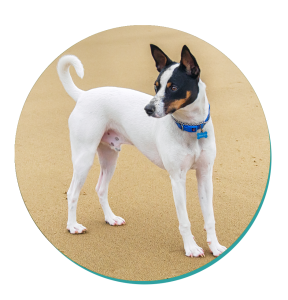 When you think of terriers, your mind might jump to the rolling hills of Scotland or England, where the Westie, Scottish Terrier, Jack Russell, and many other terriers have been romping around for hundreds of years.

But, we can say with confidence that, while there is shared ancestry with these distinguished dogs, the Tenterfield Terrier is proudly Australian.

As is often the case when it comes to terriers, the story of the Tenterfield starts, not with dogs, but with rats. As settlers from Europe came over on ships laden with grain and other natural materials, mice and rats were more than happy to hitch a ride to their new home. Once they arrived, they set up colonies on farms and in family homes, wreaking havoc on crops, spreading diseases, and doing all of the other rodenty things that rodents do.

To help manage the rodent population, small ratting dogs, such as the Old English Terrier, were common in family homes throughout towns and cities in New South Wales.

Around the same time, those settlers intentionally brought over another soon-to-be invasive species: the red fox. The idea was to establish a population for recreational hunting, and to help them out, they also brought along Fox Terriers.

You can probably guess what happened next. Farming families wanted a dog strong enough to take on foxes around the property but small enough to wiggle into areas where rats and mice were nesting in and around their homes. Dog fanciers stepped up to the challenge by miniaturising the Fox Terrier by crossing them with smaller ratting dogs. In fact, until very recently, the Tenterfield Terrier was named the Miniature Fox Terrier or the Mini Foxie.

Now, where did the new name come from? And what prompted the change, at all?

You might assume that the new name for Tenterfield Terrier is a nod to this dog’s origin. But, the fact is, Tenterfield might not be the true birthplace of this dog. Early records were not common, as farmers weren’t as interested in the dog as much as what the dog could do. And, it wasn’t only in Tenterfield that dog breeding for farm families was common.

That said, one of the prominent early breeders of the dog was saddlery-owner and Tenterfield resident, George Woolnough. It’s possible that the pup is named in honor of him. And, many other sources credit Australian television host, Don Burke, with coining the name.

However the name came about, it was chosen as a way to gain formal recognition for the breed in 1992 (modern breeds cannot be named after an already existing breed, just ask the Australian Bulldog.) Since then, the Tenterfield has become an official breed in kennel clubs around the world. And while they’re not too popular outside of Australia, Tenterfield Terrier Owners are quite proud to have one of the few truly Aussie dogs.

Like most Terriers, the Tenterfield has a personality that greatly exceeds their size.

The first thing you’ll notice about this little dog is their brazen confidence. Tenterfield Terriers aren’t afraid of much and will boldly approach larger dogs, humans, and anyone else who sparks their curiosity. But, with early socialisation, this Terrier should be a friendly pup.

That is unless you happen to be this dog’s old enemy: a small animal or rodent. While they’re quite small themselves, Tenterfield Terriers have a high prey drive for anything fox-size and under. It can be managed, but you should take special care around cats and other small animals before you’re sure your Terrier won’t follow their hunting instincts.

As family pets, these dogs are warm, loyal, and engaged. They are particularly fond of and gentle with children. That said, kids should always be taught how to safely handle a small dog like this one. As rugged as these little dogs are, they can be prone to injury when playing with children.

Tenterfield Terriers always want to be where their beloved family members are and can sometimes develop separation anxiety when left alone for long stretches. Luckily, their small size and friendly attitude make them wonderful travel companions. But, if you do have to leave them at home, make sure to have them taken care of by a Pet Sitter.

And if you’re looking for a steadfast watchdog, this is the Terrier for you. They are intelligent and alert, always on the lookout to keep their beloved family safe. That said, you’ll want to keep an eye out for early signs of Small Dog Syndrome so that they don’t become overly territorial. With proper socialisation, these puppers should be perfect hosts to your houseguests and friends.

Unfortunately, another common terrier trait you might find in this dog is a stubbornness about training. Bred to be self-confident and quick to make their own decisions, Tenterfield Terriers may take a while to get onboard with following commands. But, as with all dogs, training is necessary for their safety and wellbeing.

Here are a few tips on training a Tenterfield:

The good news is that these dogs are quick-witted and eager-to-please their beloved humans. If you can dedicate a few minutes per day to training, your terrier will be one well-mannered pup!

As a group, terriers are pretty active. But the Tenterfield Terrier is one of the more energetic of the bunch! They need at least an hour (some closer to an hour and a half) of activity per day, and will likely still be pretty bouncy afterwards!

Here are a few ideas on how to exercise this little pup:

Now, how about living conditions? As a small dog with a farm background, they can be happy just about everywhere! For apartment living, you’ll want to keep in mind that this is an active dog with a tendency to bark. They’ll need more exercise when living in smaller spaces to keep them from bouncing off the walls and frustrating the neighbours.

Remember also that terriers are dirt-loving doggos. Supervise them when they’re in the backyard so that they don’t dig up your garden!

​With a coat that was adopted from their Smooth Fox Terrier ancestors, the Tenterfield Terrier has very low grooming needs.

They shed a moderate amount and only need to be brushed every few days to help manage the loose fur. For their coat type, you can use a firm bristle brush. Beyond that, a monthly bath or as needed for their lifestyle is all that’s needed to keep their coat clean.

Regular teeth brushing and nail trimming are two other tasks to round out this dog’s grooming routine.

As a pupper with a long lifespan, you can expect that this dog will be pretty healthy. That said, there are a few health concerns on the radar for the Tenterfield Terrier:

It’s also important to keep in mind that dogs with this level of courage and energy can be more prone to injury than mellow, go-with-the-flow dogs. Make sure that they’re on an appropriate pet insurance plan so that they can get the best care in case of an accident.

Tenterfield Terriers don’t have a huge global following, but the fans here in Australia are a tight-knit group! The last survey of registered Tenterfields in Aussie breed clubs was about 1600, and most states have their own club with get togethers and special events.

Final Thoughts on the Tenterfield Terrier

The Tenterfield Terrier may belong to the historic line of European terriers, but this breed is 100% Australian. They’ve had a full century and a half to adapt to the Aussie countryside, and they’ve won the hearts of farming families throughout the nation.

Bold, family-friendly, smart, and fun-loving, it’s a joy to spend time with these lively puppers. They’ll keep you on your feet, but always with a smile. And while potty training and socialisation can be challenging, the good humour of this terrier will make it all worth it in the end. Don’t hesitate to call in the help of a local Dog Walker to help with the high energy levels and separation anxiety.

If you’re looking for a true Aussie dog to melt your heart and keep your home rodent-free forever, the Tenterfield Terrier is an obvious choice.